A Muggle’s Guide to Photographing Magic

The name Cambridge carries with it a sense of wonder and magic. There is so much history tied to this place, which creates a certain atmosphere, and is also reflected in the old architecture. Some would even go as far as to compare it to J K Rowling’s books. The comparison might not end there, for as in her books, the average Cambridge citizen is unaware of the magic that goes on around the corner. A few nights ago my eyes were opened as I stepped into the Cambridge University Magic Society’s Variety Show where they showed off their magic tricks to the public.

It was a last minute invitation to photograph the event, and I asked a few friends if they wanted to join. Some were occupied with work, others were on Vitamin-D treatments on Ibiza. In the end two brave souls joined me, Maria and Elizabeth. We learned that there would be a short award ceremony followed by performances by different university magicians. As a muggle I was not sure what to expect, so we turned up about an hour before the event started to scout the location and talk to the magicians.

As with most other things, getting closer to the magic gives you a better picture. Turning up early was a smart move, because it allowed us to interact with a few of the magicians that were practising, and photograph up close, without having to worry about blocking the view of the audience. We could also control the light levels in the lecture hall. As I have mentioned before I am not (yet) a big fan of flash photography, simply because I do not do it often enough to feel really comfortable with it and how it looks, however I had brought along my flash just in case. For most shots I used the natural light, but I did do a couple of shots before and after the show using flash since the light in the lecture hall gave big shadows under the eyes of those on stage.

Camerawise I was using my trusted 50mm lens for most shots, shooting at a large aperture and with an increased ISO to be able to freeze the action like cards flying through the air, or a suddenly exploding bottle. I was covering the action up front, and also used my 80mm lens a few times to get some close ups. Maria was positioned a bit further back, using her zoom to great advantage and occasionally flashing the audience, which were seated in darkness, to capture their reactions.

They had coupled a video camera to the projector to show the card tricks up close. I had positioned myself close to the stage and was trying to abuse this fact in my photos. For example by using a low angle I could take a picture of the magician in the foreground while getting the projector screen showing the cards that were otherwise out of view in the background. 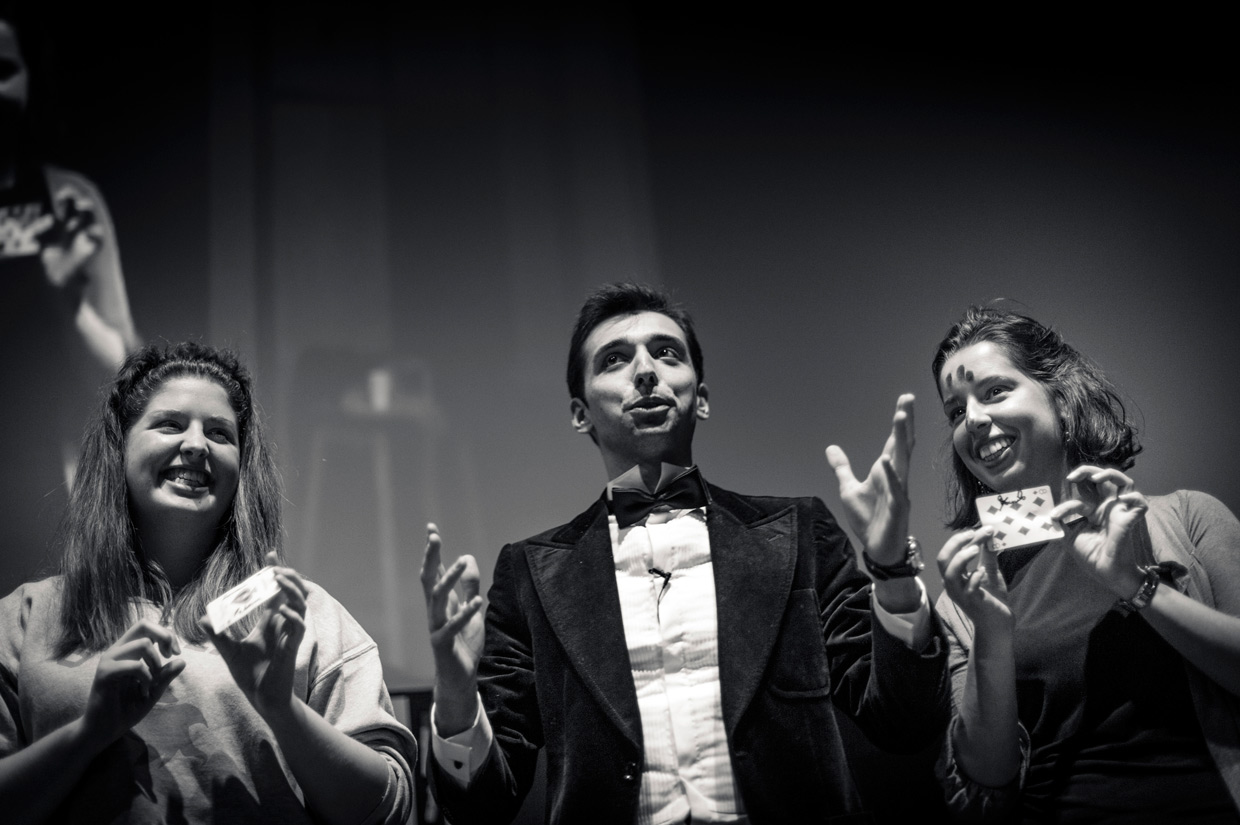 It was a fun event to photograph. One thing to note though is that when you are focused on getting the good photographs then you do not experience the magic the way it is intended. The best photos were from before the show started when I could interact more closely with the magicians, and then later during the performance the photos where they got some of the audience up on stage and you could capture the sense of wonder and surprise displayed on their faces.