Tennis in the Rain 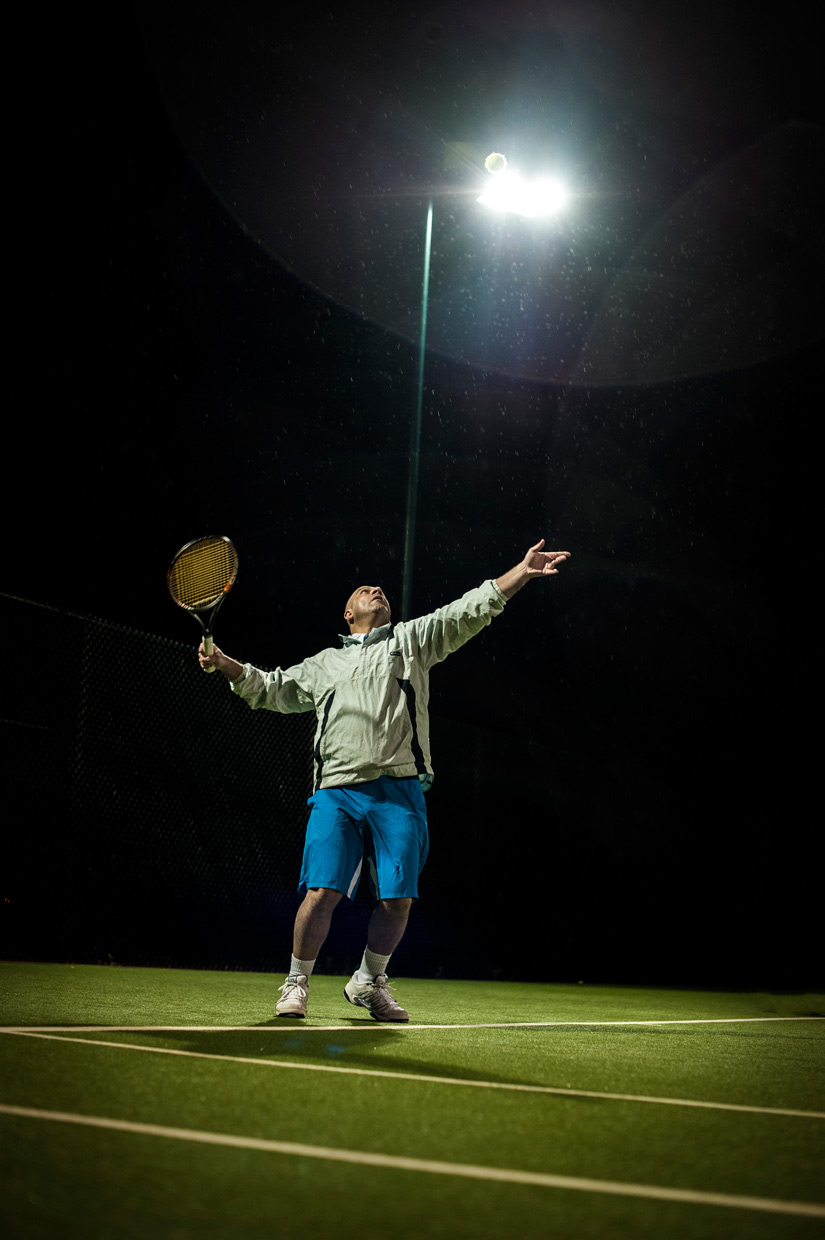 Last week I bought a rain sleeve for my camera on Amazon (link), so when I saw it was raining outside tonight I decided it was time to go out. Felt a bit funny, I figured most people were probably either home already, or trying to get away from the rain, and here I was getting ready to head out. I was contemplating bringing my tripod and flash also, but opted to go for just a basic 50 mm lens and nothing else, I even left my camera bag at home, which I pretty much never do. The camera fitted more than well in the rain sleeve. I did not bother reading the manual at the time, but later on I did and it said there was supposed to be a small hole that could be used for the eyepiece. It worked quite well just looking through the plastic into the viewfinder also, but I will see if I can find the hole next time. Anyway, by the time I was out the door the rain had stopped. Just my luck, this had happened once before when I was going out to photograph rain (but without the rain sleeve). My rationale for going out was that there must be some truth to the saying, the worse the weather the better the photos. Anyway, I was outside, so figured I might as well have a look around before going back home, rain or no rain. 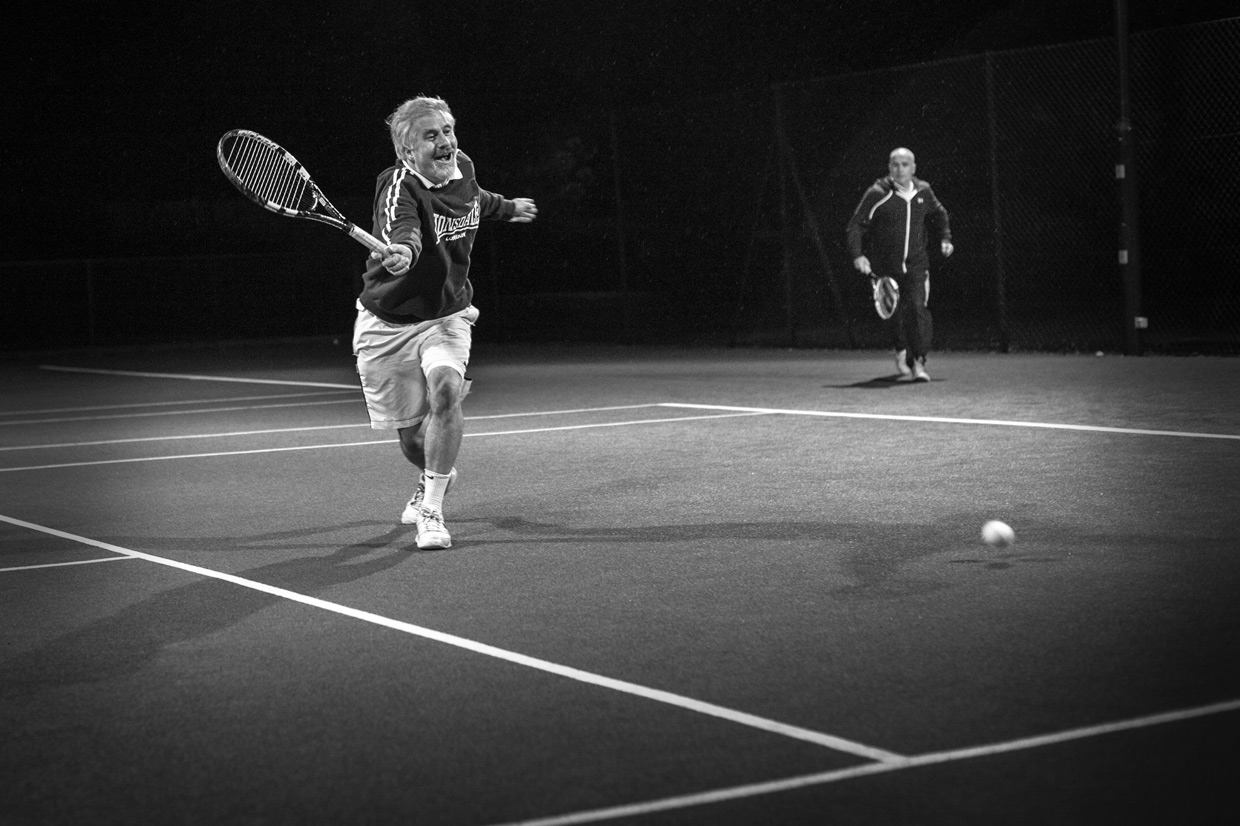 There is a tennis club not far from where I live. I have walked past it many times, and I was approaching it on my way into town. No one was playing but I was drawn to the light like a fly. Turned out a few guys were preparing to play, so I asked if they would mind if I took a few photos for five minutes or so. Figured this was a good opportunity to practise a bit of sports photography. They didn’t mind, so I started shooting. It was dark outside, but the tennis court was flooded in light so I was able to get away with quite a short shutter time. I decided to go for about 1/320 second to freeze the action. Because of the distance being about 6-8 metres I could get away with a smaller aperture and still have some depth of field (see the depth of field calculator linked in my previous blog post). With f2.5 I would have about 2-4 metres of depth of field at this distance. I picked a higher ISO in the range of 800-1000. Once I nailed down the setting I was happy with, I forgot about it, and just occasionally checked the histogram again to make sure things were still fine. The light was pretty consistent on the field. 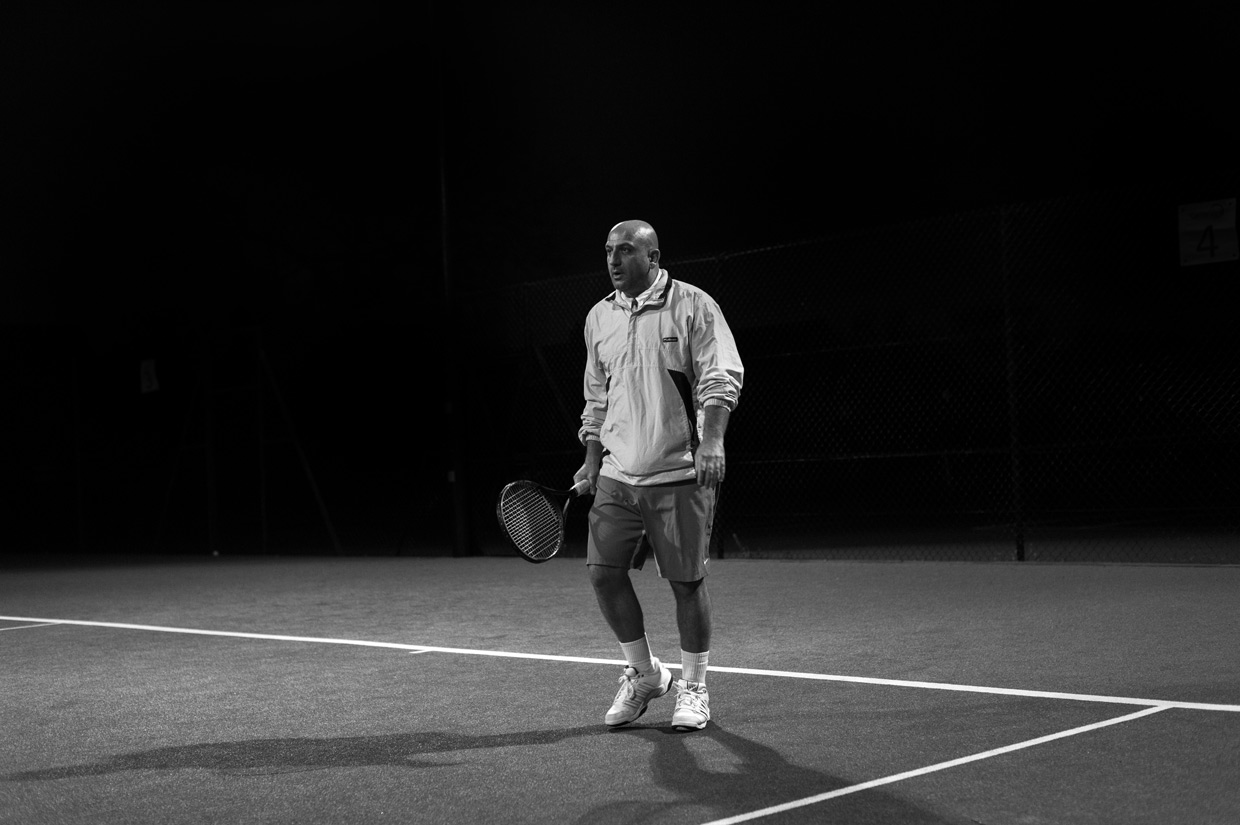 Given that I only had a 50 mm lens I felt I needed to get a bit closer to make the photos more interesting. If I had known that I would be shooting tennis I might have put on the 85 mm lens instead, but now I had to work with what I had. I started with some standard shots, just to get a feel for what it would look like, and to get my subjects accustomed to having me there. I was talking a bit with them while I was shooting and showing the odd photo from the back of the camera. Quite soon they were asking if I managed to get the shot when they did a nice serve or return. The rain started again and I took out my new rain sleeve and put it back on the camera. After a while the rain drops started to accumulate on my lens, which in my haste to get out I had not thought about. Luckily I had some paper tissues in my jacket, so after wiping my lens unsuccessfully on my shirt I remembered the tissues and managed to get the lens properly wiped. By this time my camera angles had become a bit more creative. I had figured out that a low angle gave the look and feel that I wanted for the game, so I was lying on the ground to get the composition right. Because of the floodlights the players were quite bright, but the background was almost pitch black. It made for quite dramatic shots. The floodlight also caught some of the raindrops in the air, which gave the scene some texture also. In retrospect I probably should have experimented with a longer shutter time also, to create some longer trails by the raindrops. Have to remember to try that the next time I take my camera out into the rain. 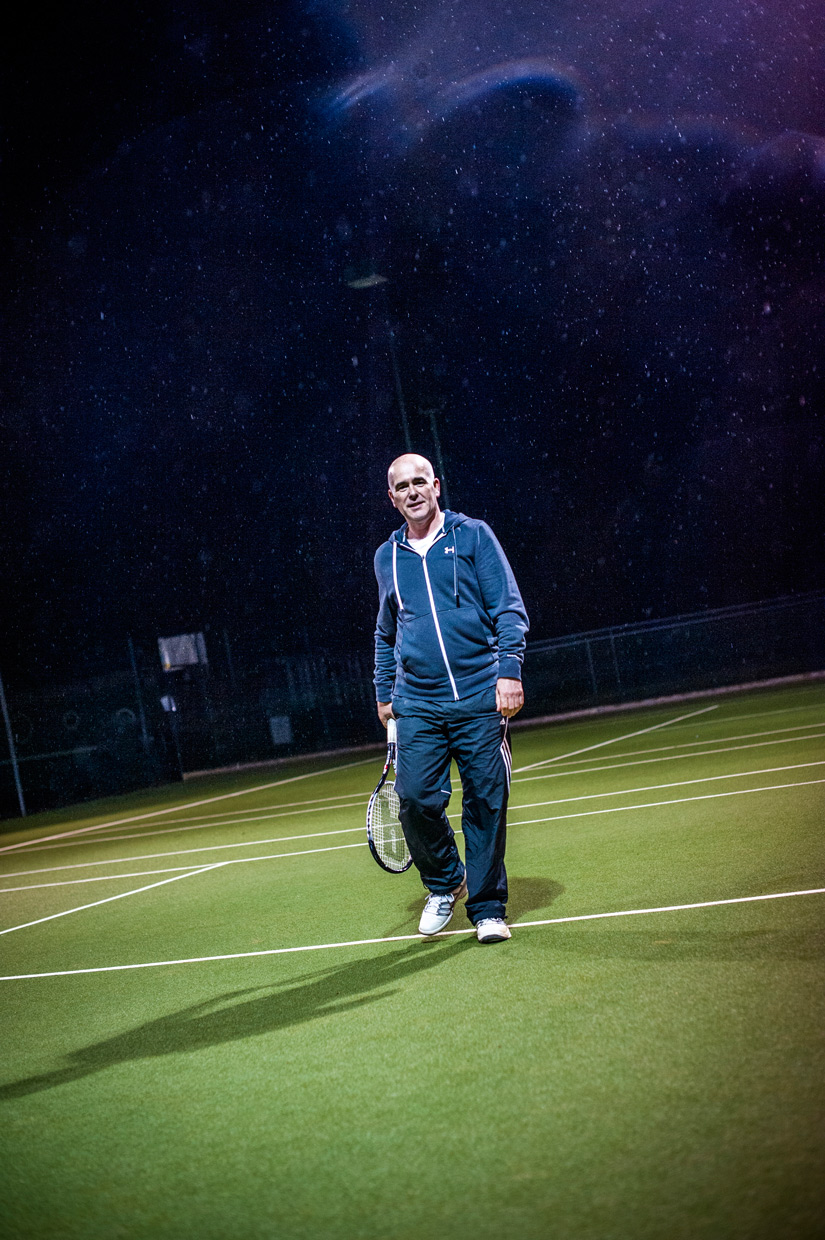 I was switching between blindly machine gunning a serve and shooting single frames trying to get a feel for when was the perfect moment. The balls were quite wet, so when they served you could see a small cloud of raindrops hanging in the air momentarily after the ball went out of the picture. In the end I preferred photos that had the ball in the picture, as they felt more complete. The five-minute photo session turned into about an hour. I was having too much fun, and forgot about time. Perhaps more embarrassingly I was also completely unaware of the scores. Just realised that I could not tell you which team won the match. Here I was watching the game through my viewfinder, or with the framing in mind, when the camera was not to my eye. For me the moment to moment movement mattered, but the overall scoring was unimportant to getting a good shot, so it seems my brain just did away with that information. It was a pretty friendly game and the gentlemen were not doing much of victory gestures, or perhaps they were too subtle for my non-English eyes to catch. After the game finished they asked if they could get a copy of the photos, so we exchanged emails. I went back home to do the post processing right away. It is a bit like Christmas looking through a fresh batch of photos, also I want to avoid building up a backlog. I did not do much touching up on these photos they were pretty good straight out of the camera. I mostly did curves adjustment, a bit of vignetting and the odd use of content aware fill to get rid of some distracting light in the background, and in one shot I removed an entire car. 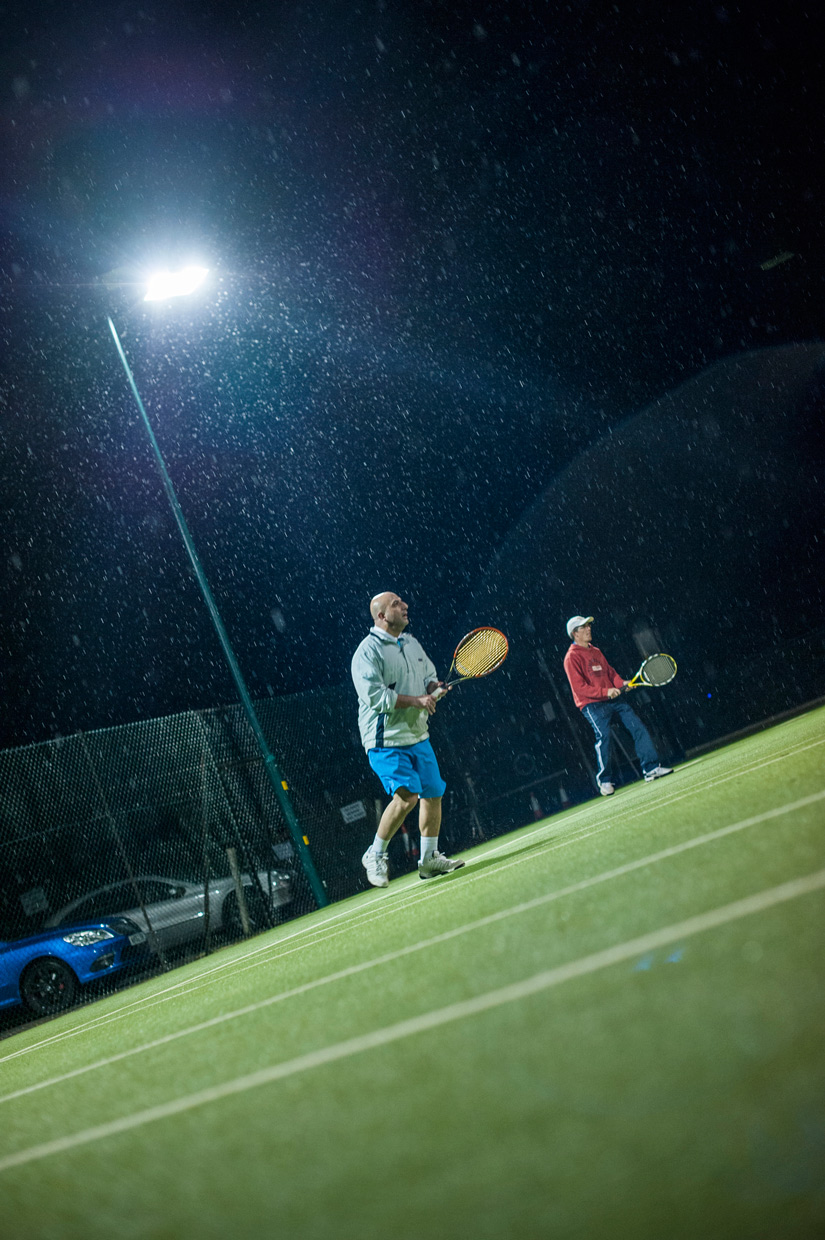 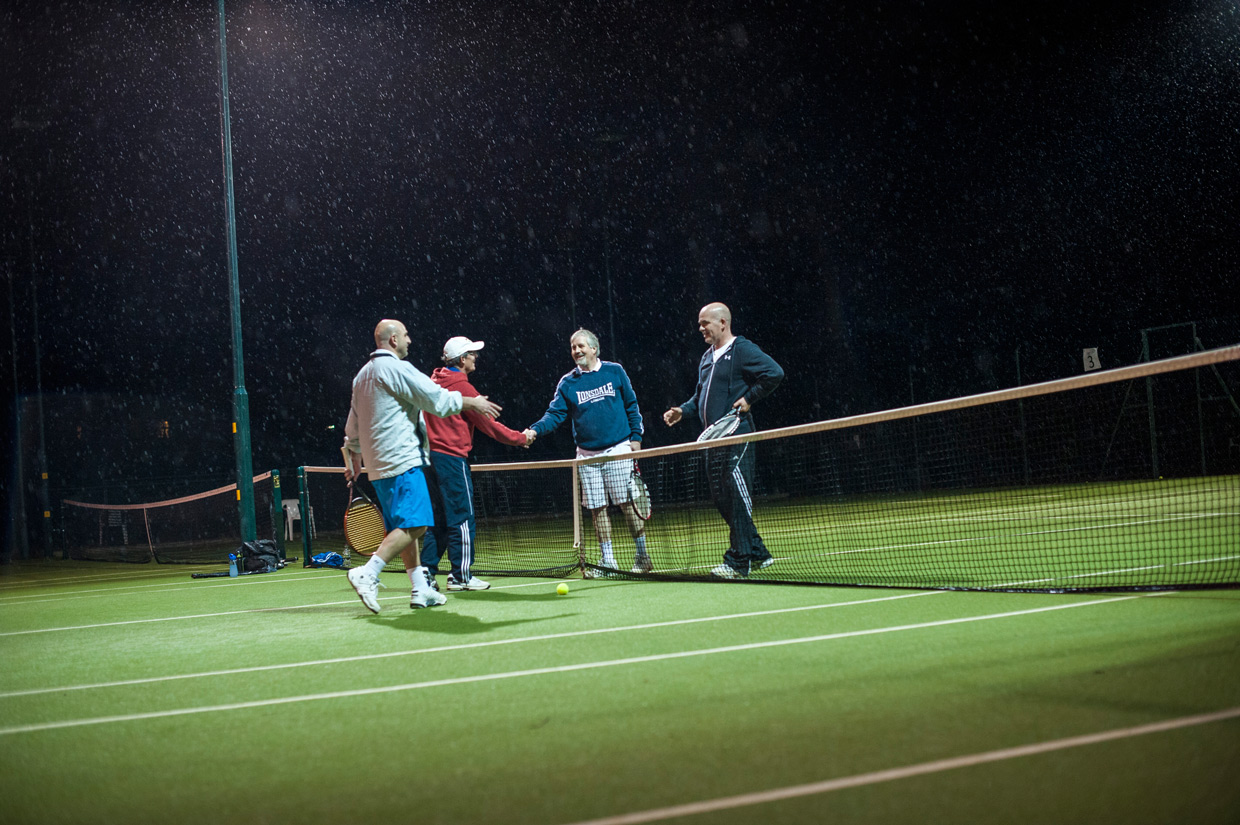 So what is the lesson learned, I guess the big lesson is just don’t be afraid to go ask people if you can photograph. I was standing there looking at the tennis court, and took one or two steps towards the town before thinking what the hell. So I turned back and asked if I could join them. Most people are quite happy to let you photograph, in moderation… 😉