My old-school school-friend Nina Klose was in London and came to Cambridge for a short visit before heading back to London to photograph a concert the same evening where her sister-in-law Mia Klose was playing. Over lunch I mentioned that the concert photography sounded really fun, and a few phone calls later Nina had arranged a press-photo pass for me, and I had completely rebooked my plans for the evening. When things move, they move quickly.

Fast forward a few hours, and I was in London at Islington Academy. I am new to this kind of concert photography, and the security people told us that we were only allowed to photograph the first three songs, and that was it. We had arrived a bit early and scouted the location before dinner to see what the venue looked like but we did not know that so many photographers would be there for the actual concert. There was a space between the stage and the barrier in front of the audience, where Nina and I and the other photographers crammed in. This meant it was not possible to quickly change your location. I had my three prime lenses with me, and my plan was to use my trusted 50 mm lens, and then possibly switch to the wide angle 20 mm lens at some point to get a bit more of the stage. The 85 mm would not see much use tonight. Also with only three songs there was quite a bit of time pressure. I took a few test shots and checked the display and histogram to see that it looked ok.

One thing that I knew would be a bit tricky was the stage spotlights which created a big difference between the brightest and darkest regions. These lights of pure red, blue, or some other colour, are deceptive, and more than once have I ended up overexposing the areas lit by similar spotlights. So also this time. Mental note to future me, it is better to underexpose a bit extra to be on the safe side. There were a few shots where I had overexposed areas of the arm, hair or face. This is not too critical if you are going to keep the photo bright, but if you want to darken it then it will look funny with these big areas of skin or hair that all the same colour. One thing I managed to do right was use a short shutter time of 1/250 seconds, which helped freeze most of the movement. Towards the end I darkened the photos a bit further by changing to 1/320 seconds.

The auto focus was struggling a bit in the darkness. I used a pretty big aperture to get more light, but otherwise an option could have been to reduce the aperture somewhat to get more depth of field, and then use manual focus. Might try that next time, if there is less time pressure and more chance to experiment. Mia had a good stage presence, and moved around a lot, which was good as it gave us a bit of variability in our shots. After the first song I switched from the 50 mm to the 20 mm lens to get a wider field of view. I wanted some shots that put her in the context with the band playing around her. 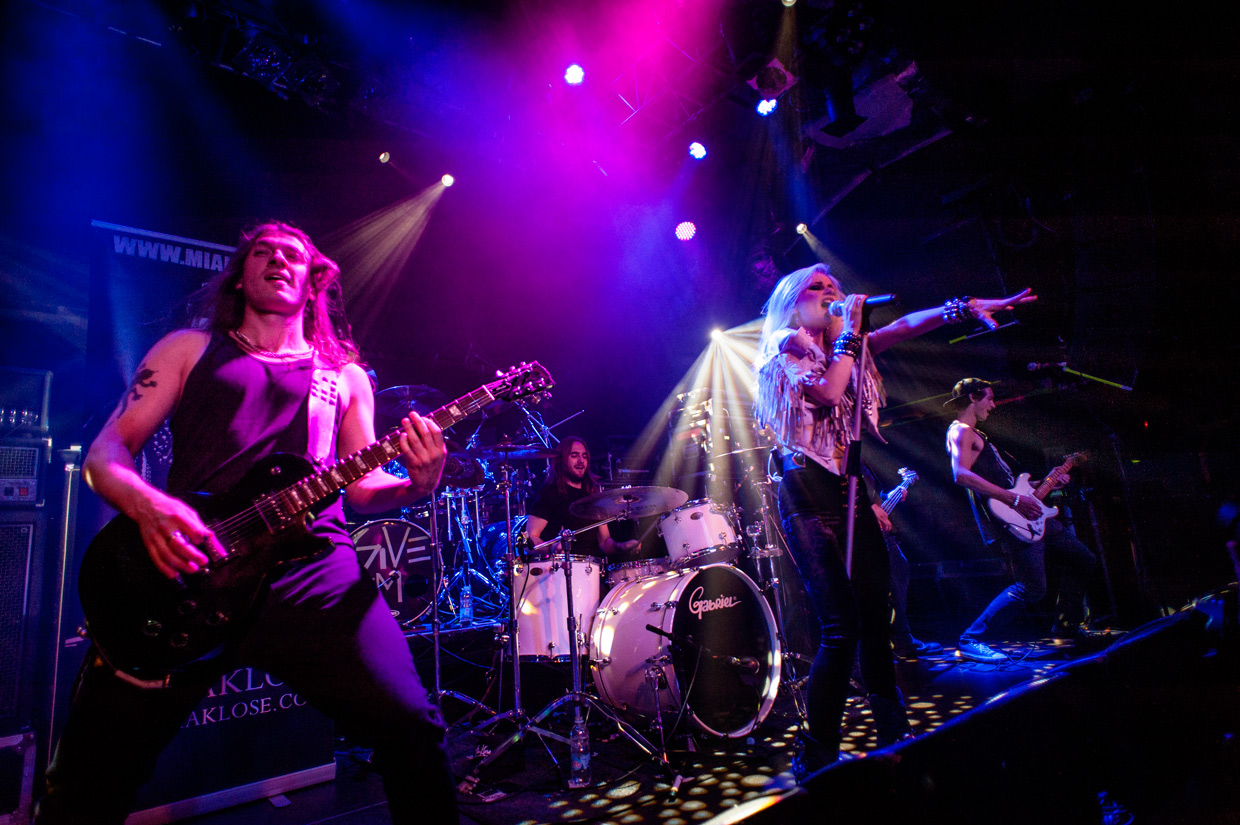 Three songs go really quickly, but it was a fun rush. Thanks to Mia Klose and the band, and of course to Nina for getting me there in the first place!